Before we dig into the bread and butter of this article, I would like to begin with a quick breakdown (a crash course if you will) of what exactly pokie grants mean in New Zealand.

Pokie grants are essentially a portion of the money generated from the presence of gambling machines (colloquially referred to as pokie machines or simply pokies) that is redistributed back into various organisations that operate for the benefit of the wider community of New Zealand, whether that be in areas such as health or education.

The aim of these funds is to determine businesses, services and organisations that qualify for said funding and provide financial assistance for the purpose of growth, development and innovation.

It is a government service that stokes the fire of helping initiatives burn brighter.

Why Is It Relevant?

The discussion about the place of pokie machines in contemporary New Zealand society is a hotly debated issue that has only grown more prominent as time goes on.

As far as gambling discussions go, they are rarely ever devoid of deep polemics and division, even more so if occurring between two parties who fall on different sides of the for and against coin.

Indeed, the positive thing that has come out of the profits generated by the pokies machines located throughout New Zealand is the pokie grant money that has been distributed to various community organisations, government agencies and local groups. Profit granted from nz online casinos is not yet distributed to the community, but this might be introduced in the future.c

Public funding and financial assistance have always been a high priority for the New Zealand government, and fostering growth in both urban and regional New Zealand is an issue of utmost importance.

Over the last year, there has been some favourable distribution among various groups of New Zealanders, in areas such as sports, community development, research and education, with sports institutions focusing on Rugby seeing a large share of the funding.

Grants funding has been on track to surpass 2020 and 2021 numbers, which signifies a positive trajectory in the right direction and further continued support for programmes and services like a provincial growth fund.

If you're gaming in New Zealand, the activities and organisation carried out in the process of all manners of gambling businesses are regulated under the relevant legislation and regulations. 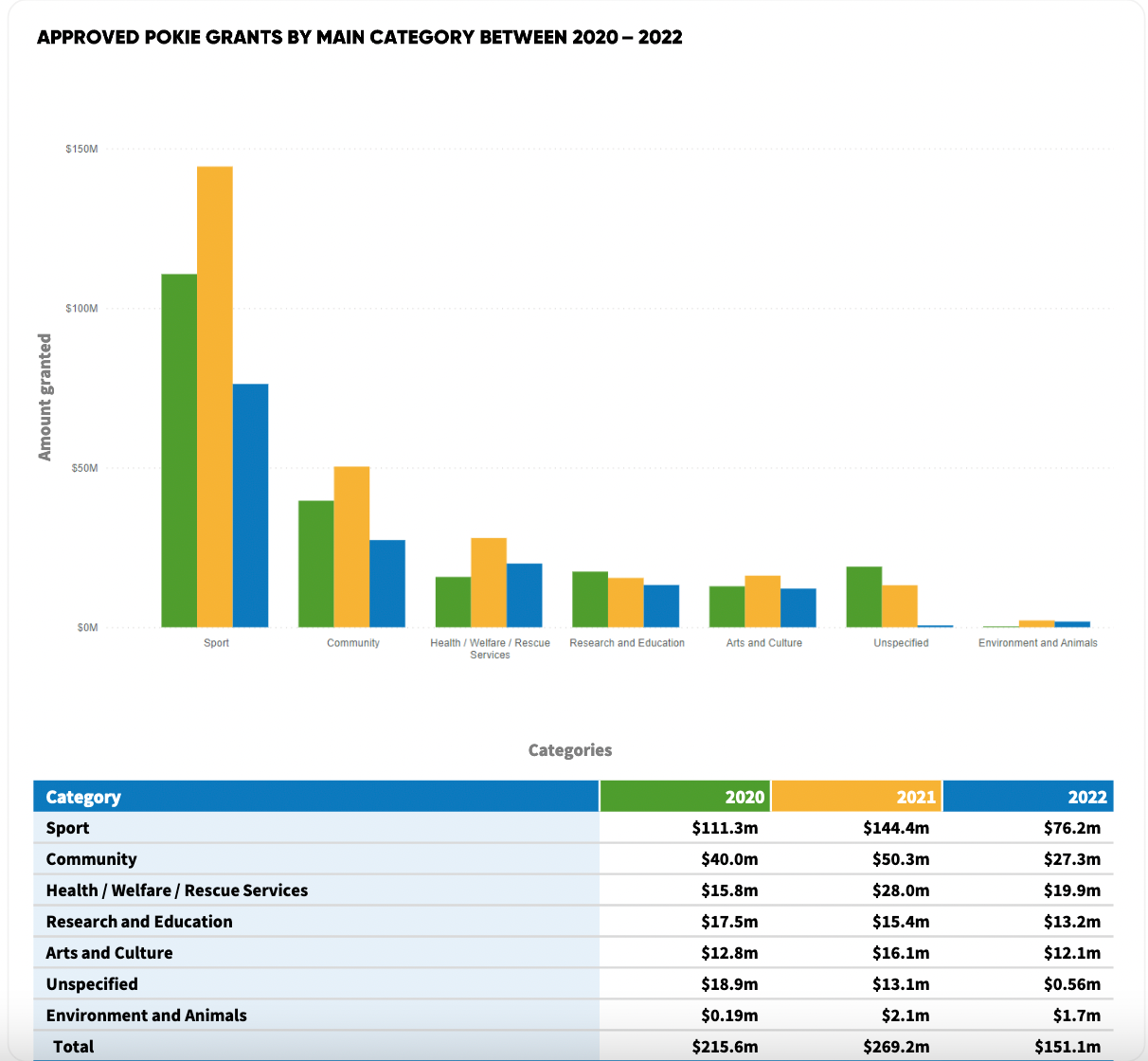 As part of the gambling act 2003, when the legislation was written, government agencies researched the impacts widespread gambling can have on the community and thus introduced measures to address this.

It is well documented that the ubiquity of gambling in a community, especially when in the form of pokies, can have a negative impact on individuals and families within the community through afflictions like gambling addictions and mental health issues that can arise from improper gambling.

Thus, one of the critical foundations of the gambling act 2003 was to ensure that a reasonable portion of the profit generated from gambling institutions within New Zealand society was redistributed as funding to assist in the development of services, grants, advice and assistance to various entities that were eligible.

Entities that were eligible to receive such funding would fall under the categories of sport, community, research and education, arts and culture, environment and animals, health/welfare rescue services, and other uncategorised entities.

The pay towards the bodies that lie within these categories would be carried out with the intention of fostering development, innovation, service, and knowledge for the future.

As well as an increase from previous years in pokies grants funding, there have been numerous increases in specific areas that have enjoyed increased financing, enabling them to be paid more and increasing the annual income which can be used to service the total amount available to assist programmes.

The diagram below represents the approved pokie grants by the approved category and additional data on the right side.

From this image seen below, we can conclude that sports received a lion's share of the funding, as New Zealand has historically been a country which a deeply entrenched sports culture, consistently punching above its weight successfully on a national level, and on the international stage.

Community initiatives and programmes enjoyed the next largest share of the 10.3k approved pokie funds awarded, as the aims to develop communities, preventing them from risk and costs associated with community issues being an important factor.

Naturally, Health/Welfare/Rescue services received a large share of the grant, which will assist employees in these sectors and generally improve working conditions and the services that can be provided for citizens.

The rest of the assets for investment were divided quite recently amongst the remaining range of projects, with Research and Education, Arts and Culture receiving a similar outcome, while Environment and Animals received $2 million.

For example, when referring to the categories of organisations, tax-free funding has gone towards sports more than any other category, with sports receiving $76m of funding, making up 50.42% of the total funding received across all organisations. 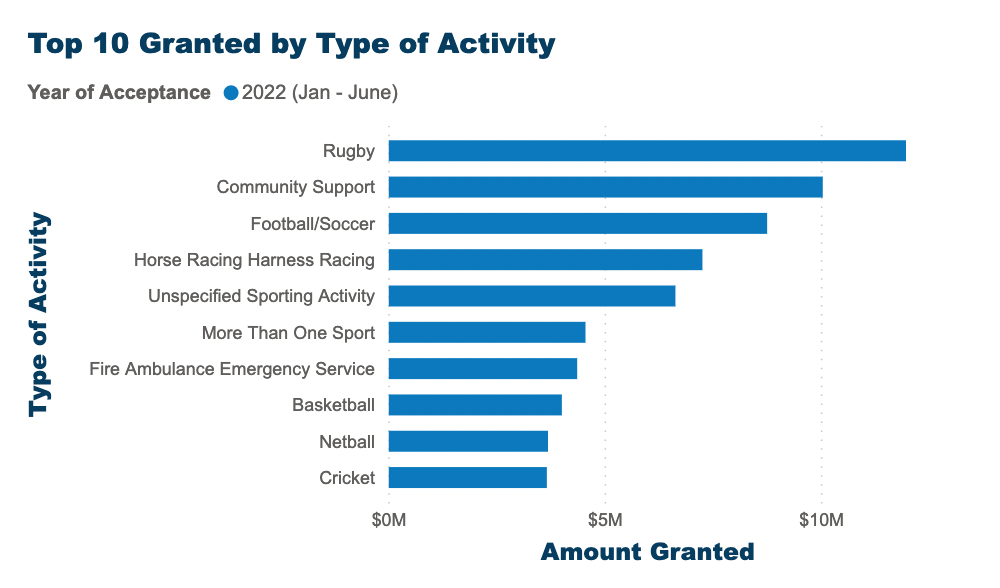 It's never been a secret of how deeply Kiwis value and appreciate sports within their shores, and the funding distribution from pokie grants stayed true to this notion. Unsurprisingly, Sports bodies and institutions were a significant percentage of all of the pokies grants awarded in 2022.

In regards to the code of sports, the money was most heavily distributed towards Rugby, with the nationally renowned and loved contact sport enjoying $12 million dollars awarded to a total of 343 organisations across New Zealand, representing a total of 15.7% of all sports grants provided in 2022.

Snapping at the heels of rugby to come in at a relatively close second was football (commonly referred to as soccer) with their share of the funding to the tune of 11.48% of all grants awarded to sports institutions.

The next largest share of the pie came in the form of unspecified sporting grants, which made up 8.70%.
If you would like to learn more about how to wager online, you can check out our page about online sports betting. 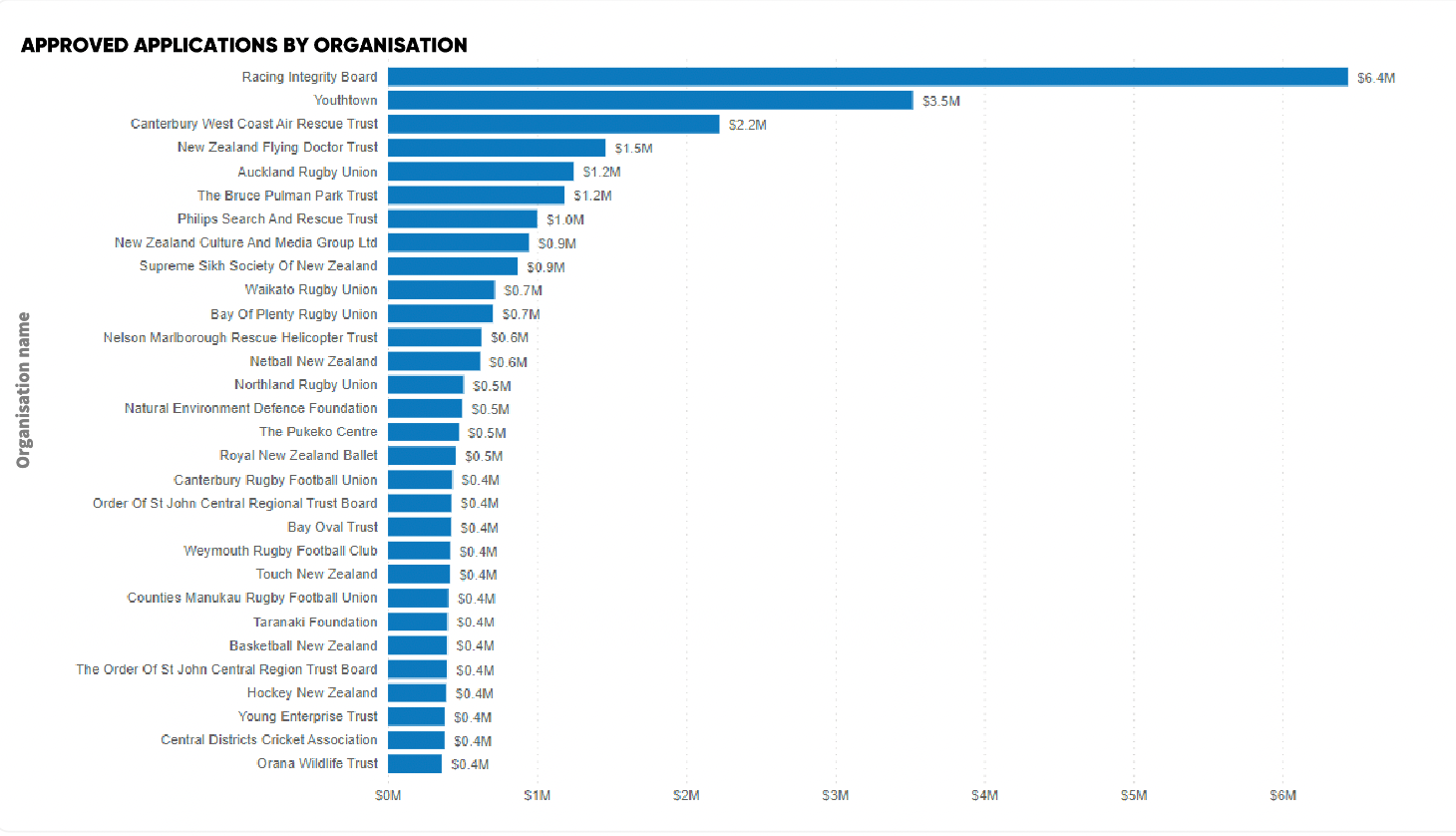 The funding was distributed far and wide, with a diverse array of organisations receiving pay that would serve to greatly assist the quality and consistency of the services and programmes they provided.

Of these 13 organisations that received these notable sums, there is one organisation that received a considerable quantity more than others. The institution in question is the Racing Integrity Board, which is the major beneficiary of gaming machine funds raised by TAB New Zealand.

The next highest recipient of these government grants was Youthtown (an established national not-for-profit Kiwi organisation that organises youth programmes), which also runs gaming machines to raise profits for their own programmes. They received a total amount of $3.5 million.

The trend of diversity amongst the higher recipients stays consistent amongst the other members of the $0.5 million club, with other notable recipients existing in fields such as medicine, rescue services and sports, Canterbury West Coast Air Rescue, The New Zealand Flying Doctor Trust, and the Auckland Rugby Union.

Another factor one might consider when analysing the distribution of pokie grants is the geographical makeup, notably on what scale income and pay are being generated by pokie machines throughout the archipelago.

As one might expect, the metropolitan areas of New Zealand received the most funding towards businesses and services that qualified for a grant.

Auckland came out as the clear number one in funding received, taking 26.6% of the total pokie grants for all regions across New Zealand. Of course, this is hardly a surprising result, as the most popular urban areas tend to receive a lion's share of government grants due to infrastructure and population density often requiring it.

In considering the regional spread, a natural follow-up would be to ask how a person might find out how the income for the grant fund was redistributed, in what manner and in what amount, across the region. 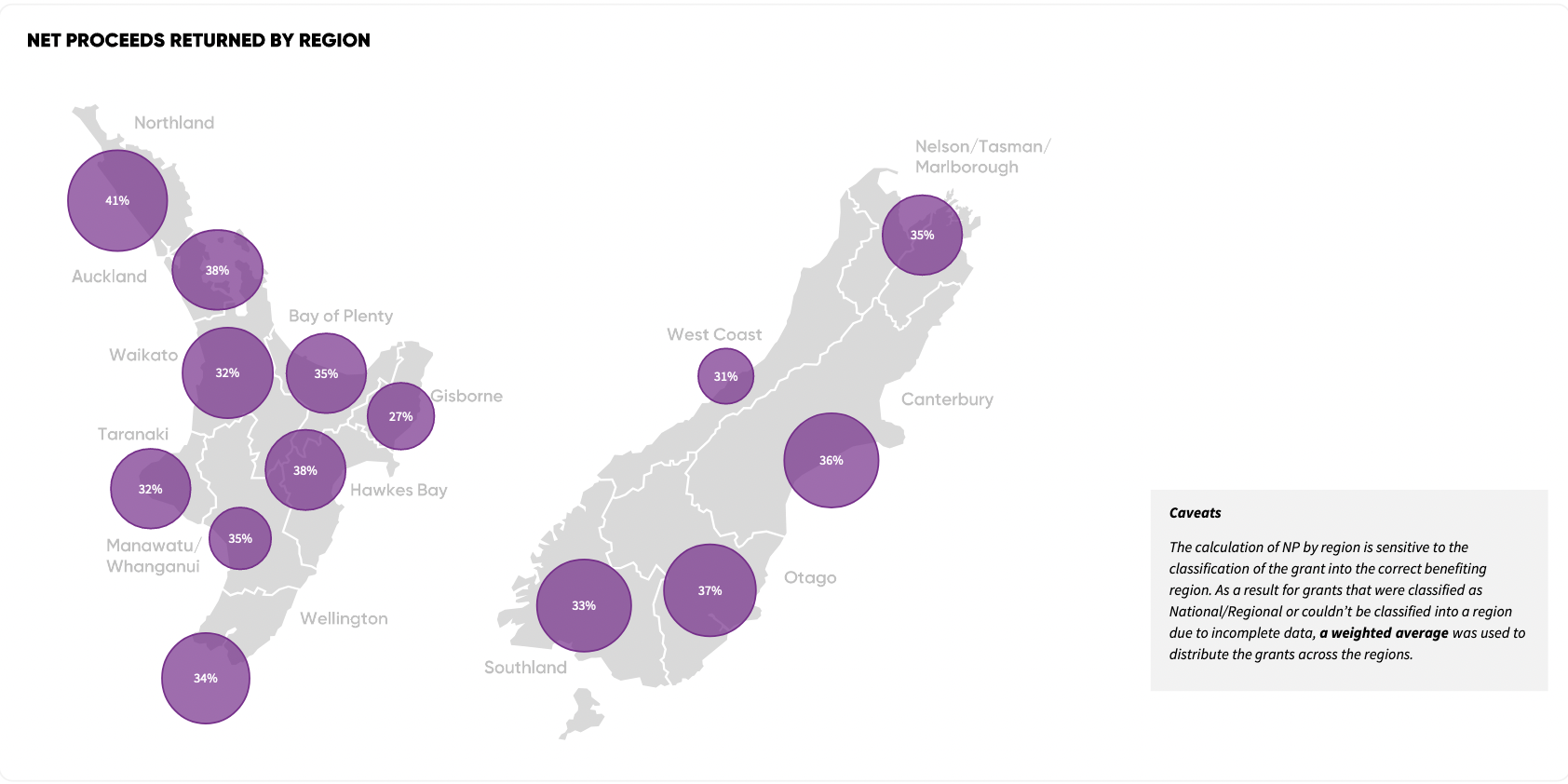 In regards to the banding of the grants pay, the large majority of grant bands were in the 0-10k region, which was primarily for self-employed entities, small businesses, local education and innovation.

The descending trend of the % of Total $ Amount Granted continued until the very last category, which was the grants that exceeded the $70k amount. 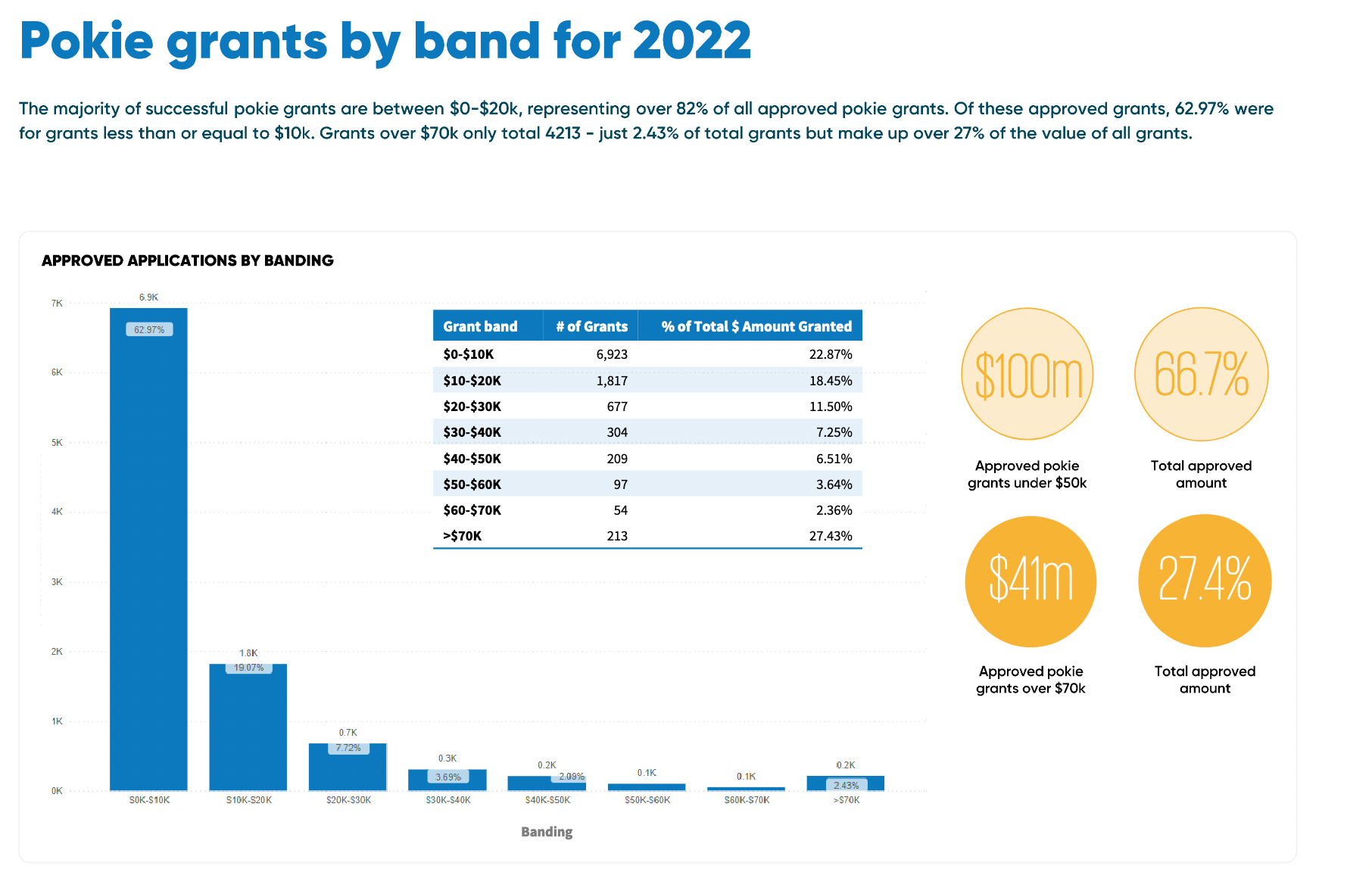 The data collected for this article largely utilised the information available through think tanks and official government data to ascertain both the numbers and the conclusions that were drawn from the data.

The sources that were used are listed down below and further data can be acquired from the New Zealand official government website.